Events will be held at the historic Capitol Theatre and proceeds to benefit the Greater Cleveland Film Commission!
Doors open at 6:00, Interactive Conversation begins at 7:00! 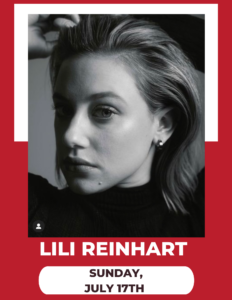 Lili Pauline Reinhart is an actress and producer who is proud to call Bay Village, Ohio her hometown.
She officially began her acting career when she decided to audition on a whim for an Olmsted
Performing Arts musical production when she was 12. Many musicals and auditions later, Lili would
meet her first manager and subsequently sign with her first agent. Lili is most well known for the role of
Betty Cooper in the CW hit series “Riverdale” which has just completed its 6th season. You may also
recognize her as the face of Cover Girl for the past two years as well. She has won several Teen Choice
Awards during her time on Riverdale and has amassed an Instagram following of almost 30 million
people.

In the past two years Lili has appeared in the critically acclaimed film “Hustlers” starring along with
Jennifer Lopez, Constance Wu and Keke Palmer. She also produced and starred in Amazon’s “Chemical
Hearts” film which was the first project that introduced her to the producing side of the business. In the
meantime she has created her own production company (Small Victory Productions) and signed a first
look deal with Amazon Studios for Film and TV. Small Victory will develop original and adapted content
for film and television with a focus on modern young adult content that celebrates diversity and
inclusivity.
Lili’s next film project to be released will be Netflix produced “Plus/Minus” which is slated for a release
this August.
Reinhart can also add the title “Author” to her name as her debut collection of poetry “Swimming
Lessons” became a New York Times best seller.
Reinhart currently resides in Los Angeles, California with her dog Milo when she isn’t shooting Riverdale
in Vancouver, British Columbia.