No one told me there would be math involved. A multi-camera comedy, commonly known as a  sit-com, has a fairly rote formula behind all the wacky hijinks. Being funny IS something  everyone can do, but there is an art to uncovering and serving the script. In this class, we  explore the traditional roles of comedic acting, analyze the structure of a comedic script, and  uncover our own brand of humor that can create magic. We will include improv as well as  scene work. Scenes do not have to be memorized, but it would probably help with timing. 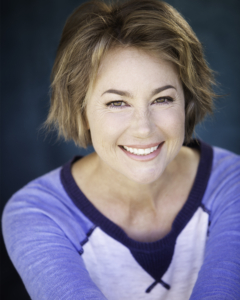 Kim Rhodes is best known for her television roles as ultra-mom Carey Martin on Disney  Channel’s “The Suite Life of Zack and Cody” and the intrepid Jody Mills on CW’s  “Supernatural”, where she survived for ten years. She has been passionately despised  for her brief but eventful tenure as Linda Barnes on “Criminal Minds” and had a glorious  appearance as the first Kobali, Ensign Lindsay Ballard, on “Star Trek: Voyager”.

She currently resides in Los Angeles with her husband, daughter, and numerous pets.  She resists all advice and risks her spinal column on an almost daily basis due to her  passion for riding horses and teaching the love to youngsters.

Sorry! This class or event is full.